Take Hold Fest 2016 occurred at Take Hold in Grand Rapids, Michigan from November 11th-13th, 2016. My wife, Elphie and I drove up Friday afternoon. We got a hotel...I decided to try to surprise her by getting a hotel with a hot tub in the room. In the summer, I had tried the same thing with a planned anniversary trip to Hell, Michigan which had to be cancelled due to car trouble. After checking in at the hotel, we left for the remaining bands of Friday night and to hang out with friends. The bands I filmed were:

We returned to the hotel and tried out the hot tub. It took awhile but we finally had a tub full of water...but then we found out that the jets did not work (or at least we could not figure out the trick to make them work). It was late so when we checked out in the morning, that's when we informed the staff. It was slightly disappointing as you see in the video clip.

Saturday morning we returned to Take Hold for the rest of the fest. The bands I filmed were:

Desiring Dead Flesh, Anti-World System, The Festal Shout, Dad Jokes, F.B.S., October Bird of Death, and The Blamed. I filmed the full set of The Blamed. 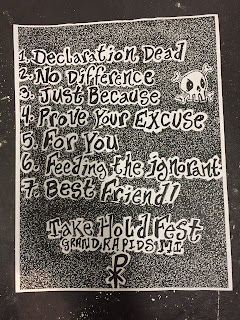 Dinner break, we left for Plainfield, Michigan to attempt to get the special venison sandwich from Arby's. We found out that they sold out in the first hour that they were opened. We were given complimentary roast beef sandwiches but once again we were slightly disappointed.

The bands I filmed in the evening were:

Shane Cox spoke for a moment to close out the night and we hung out for a while before leaving for home due to a morning appointment we had scheduled for our cat.

During the Families set, I encountered technical difficulties. The screen to my camera was not working unless I had it flipped entirely around and pushed against the camera. It may have effected my footage somewhat in that I had to hold the camera in such a way to look at it with the screen against the side to see what I was filming.

It definitely made getting the footage off the camera more difficult (check out the previous blog for details on that) but I finally got it done. That is why I just finished this project this week.

I used the song "Raised In Glory" for The Soil and The Sun as an additional soundtrack for some of this footage since that band is from Michigan and would be coming to an end around the same time.

Filmed & edited by Joel A. Swanson
aTigerRAWkFilm.blogspot.com
Posted by Joel Swanson at 6:46 PM