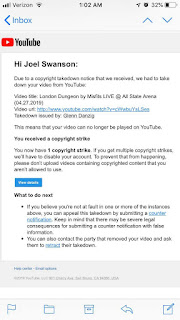 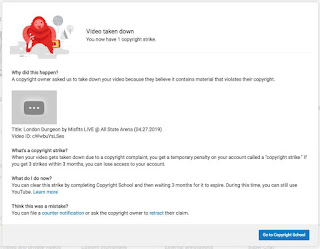 For the first time, thankfully, I have been given a "Copyright Takedown Notice" on YouTube. for my video of "London Dungeon" by The Misfits filmed LIVE at All State Arena on Saturday April 27th, 2019. The takedown was filed by Glenn Danzig. There were signs at every entrance stating that photography and video (including cell phone) was prohibited. I suppose that was enough warning that perhaps choosing not to upload and post the video would have been a better plan. I figured it wouldn't matter...I've been to other shows with the same kind of signs and other folks were getting video or photos and so was I...other footage was uploaded and shared online which I did as well. There was never any repercussions from doing this before (at least not yet). In this case, it turns out that I was wrong.
https://youtu.be/cWwbuYsLSes

In these recent years I have been hearing of artists who don't want people taking photos during their shows or capturing video. One reason given is that they want you to experience the moment, not be consumed in your phone. I get that and I respect that.

For me, personally, I enjoy the moment but I also like to take a moment with me when I leave in the form of a photo and/or video clip. I try to be mindful of those around me when I do so...I try to not block the view of anyone else or have my phone or camera held over my head. I try to keep the screen brightness low to be the least distracting I can possibly be. I tend to choose to be toward the back so that there are not many people behind me, if any, to be distracted or have their view impeded by me. At most shows I only try to capture one song during the set so to limit any distraction I may cause. If I do decied to film more than one song or a whole set, I make sure I am in a place that I am not going to impede the experience of those around me. Again, I can only speak for myself but I try to be mindful of others during the live music experience that is happening.

I realize that there are others who are not mindful...trust me I definitely realize that and I am as annoyed by it as anyone. If they aren't impeding other peoples view, they are distracting from the show by being on their phone throughout the night (sometimes texting, not even capturing video) and not experiencing the moment. I definitely get that it is annoying and so I try to make sure I am not that person.

In other instances, it seems some artists just don't want footage out there on the internet (YouTube in this particular case) that they have not approved of or that they have not authorized. That is my guess is the case with Glenn Danzig with my video (and apparently others as there is "clear history" I am being told). With that in mind, I'm not sure that I will attend any other show that features Glenn Danzig or The Misfits.

In many cases I have had the opportunity to meet the people who are the artists that I capture in my live videos of their performances and a lot of them seem to appreciate that I do it. We are not too far removed from each other so we are able approach each other and therefore have a relationship that if they want to have a video removed, they can ask and some have done just that. I do not have such a connection to The Misfits or Glenn Danzig so I suppose for him (or his people) to personally approach me would have been very unlikely and perhaps not plausible. I don't anticipate that there would be strikes against my YouTube account from most other videos but if the copyright situation continues to escalate, then I would be forced to make some changes.

I acknowledge that these live performance videos are capturing someone else performing their art which they may have copyrights on. In that regard, most all of the videos I create would be open to possible strikes against my account if the artist were to choose to file a claim. If such action occurs, then YouTube would not be the place for me to continue to do that which I enjoy doing.

While what I am doing is capturing the live performance of other people performing their art, I feel that the video I create is a creation of my own as well...and in a way it becomes a collaboration. I acknowledge that most people viewing the video are not viewing to see how I well I filmed it or how went about capturing the video or how I edited it but simply watching to see the performance of the art, it is still something that I create. I create the video for the purpose of watching it again (and probably again and again and again even when I am a senile old man thinking about "back in my day...") and for the purpose of sharing it for others to see if they choose to watch them as well (the numbers tend to indicate that some are "hits" while others are not so interesting to others). I will still shoot live video even if the option of publicly sharing it is taken away.

When I first started doing this 13 years ago, I didn't have to worry about copyright claims. As time went on, the copyright claims have become something to navigate through. I have had some video projects blocked worldwide or in certain countries due to the music contained within the video. It is not usually the live performances but it is usually the music I have added in as a soundtrack of artists who have worldwide notoriety. In the past, I typically would chose to use music by people I knew or people who are lesser known in order to not find myself in that situation. While it is not the first time that there has been a copyright claim, even ones with the consequence that the video cannot be viewed in certain area, on live footage...it is the first one that earned me a strike and a takedown. Again, in consideration of this, if the situation escalates and more of my videos receive such strikes, changes will have to be made...perhaps no longer using YouTube or perhaps no longer publicly sharing the live footage or projects I create. 13 years is a long time...a lot of projects have been uploaded and posted in that time. My channel has been permitted to do bigger and better things in that time. I do not wish to start over nor have the time or resources to do so.

Another thing with regards to the live footage, as I stated earlier I have had some instances where folks have approached me to have videos taken down from public viewing for a variety of reasons. A couple cases in the last year were due to new music being released and the desire for the artist to have control over how it would be received upon release without any other form of the music being in the way. For me, that meant they were asking that I remove the live performances of that music for at least the time being.

I had an artist in the last week (as well as some others over the years) request to have videos removed from public viewing because of "re-branding" and/or trying to start with a clean slate (and others in the past have made the excuses of the band not being the same as they were then or having a change in sound/style...). I prefer to not remove these videos because they are a thing I have created (although it is of another person's performance of their art...refer a few paragraphs up if needed to see my thoughts on that).

I don't believe that the videos that show where an artist has come from will do any sort of damage to the new "brand" that the artist is apparently looking to achieve. I believe that there is value in showing ones roots even if there is a level of embarrassment. The exception to this, I suppose, is if there is some harmful views expressed....but I am pretty sure I would not share a video if I am aware that harmful views are being expressed in the performance. I don't believe a band who is changing in whatever way that they are changing will lose any fans if evidence of their previous work is found. If anything, the most dedicated fans would be the ones to find such evidence (and they will whether it is on my YouTube channel or by other means) and it would probably not only solidify their love...they would be the ones to share it with others, resurrecting it from a collection on a YouTube channel where it has sat over several years have only been viewed sparingly previously.

Ultimately, I suppose I am realizing in this that the artist has the right to request a takedown and that I should comply even if I don't particularly like it.

My intention in filming live performances has never been to embarrass the artist. It is a snapshot of a certain event at a certain time. For the most part these are public events that anyone else could have been capturing live footage at of the same artists. It just happens to be a hobby of mine and I hope that it is never something that would bother or embarrass someone else (To the one who requested a clip to be taken down due to their embarrassment, I find it strange that the clip was so embarrassing to you when you begged and pleaded with the venue I was working with at the time to book a night for you to share your music and performance...but so be it, I hope the best to you.).