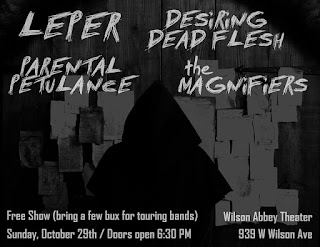 https://youtu.be/v20iPwnOvLE
This Wilson Abbey's Catacombs show was intended to be filmed in its entirety using my Canon Rebel T6 camera but I did not have adequate space on my memory cards so I also filmed it with my iPhone 8 and Elphie got some additional footage using her iPhone 6. I continue to have to break up my footage to some degree due to the "12 minute limit." I still have not yet figured out a way to bypass this inconvenience. The clips I filmed with my iPhone 8 had some adverse affects on the audio. This occurred because I left the plastic wrap intended to protect it in the packaging on the phone. I thought it would be good to leave it on until I received the case and screen protector in the mail but the plastic seems to have blocked the microphone adversely affecting the audio quality. I originally figured this out on some other footage that I edited a day or so after I had filmed this show. I have tried to remedy this the best that I could in the editing process.

This show was part of a regional tour featuring Desiring Dead Flesh, Parental Petulance, and The Magnifiers. Leper joined as local support and was given the headliner spot on the bill.

I filmed the Leper set using my iPhone 8. There is a gap that I edited using a fade near the end because of the unexpected encore. Leper played a fairly long set which included some improvisation and an encore. I tried to make it sound the best that I could in the editing process.

I also filmed the entire set for Desiring Dead Flesh using my iPhone 8 so there were some problems with the audio which I tried to remedy in editing. I also included a clip from Elphie that she filmed using her iPhone 6 during "Holidays Suck."

I used both my Canon Rebel T6 and iPhone 8 during the Parental Petulance set. I ran out of space on my memory card for my Canon Rebel T6 so I switched to my iPhone 8. There are some small gaps due to the "12 minute limit" again and there was a moment where my iPhone 8 stopped filming for some reason as well. I worked through the iPhone 8 audio issues the best that I could in editing.

https://youtu.be/CGT26J6M-OQ
The Magnifiers opened and, for me, were a pleasant surprise. I was a bit skeptical based on some older clips I watched and samples of older audio I had heard. They put on a good show. This set was filmed entirely with the Canon Rebel T6 so there are some slight gaps due to that "12 minute limit" plague. I also had some difficulties getting good clear shots when zoomed it. I think that is due to a particular lens I've been using and may have to consider not using it anymore for this purpose at least. I had a few difficulties also with filming over and through the crowd the way folks positioned themselves so there are some shaky moments here and there while I tried to move the camera or lift it. It's all still part of the learning process.


https://youtu.be/h6h7HG7XJwU
There were a few other random clips so I decided to make a "shenanigans" video...it mostly consists of Elphie eating and sharing her Witch Poop. These clips were filmed using my iPhone 8.
Posted by Joel Swanson at 11:29 AM